The Five Benefits of Constructive Dissent 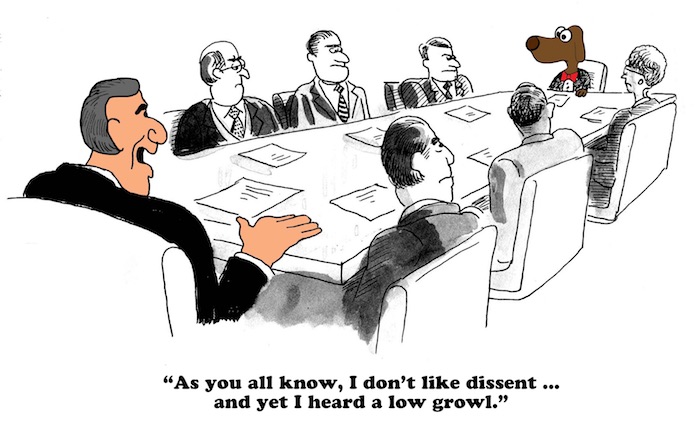 I am always troubled by leaders who can’t handle different points of view than their own. No one leader has all the answers nor should they be expected to. As you grow an organization, you will find you need to rely on people more not less.  Weak leaders want to employ “yes” men or women. They shroud their own insecurities or misplaced ego, by only tolerating what they want to hear from others.

Of course, not all dissent is good. Some people just criticize to be critical. Others may have motivations that aren’t in the best interest of the organization. The ability to dissent is something you earn. It is also something that should be based on more than just strong opinions.  Behind it, there should be some level of expertise and/or well-thought arguments.

In my twenty plus years of advising leaders, I have noticed the following five benefits of encouraging dissent in your leadership discussions:

First, as a leader, it keeps your ego in check. It’s too easy for a leader to build a bubble around him or herself. Especially as the organization attains some level of success, many “under pressure” leaders don’t like to be second-guessed. If you’re not careful, you may start to think that your decisions and actions are bulletproof.  And, when you start thinking this way you are doomed. I’ve yet to see a leader with a perfect track record.  Confidence is a good thing, arrogance is not. “Pride does cometh before the fall.”

Second, it focuses the leader (and leadership team) to reflect on their decisions and actions more vigorously. I get a bit nervous when I sit in on a leadership meeting and everybody agrees on everything all the time.  If you are always agreeing, you’re not really thinking.  Moreover, asking for feedback and receiving none in return my be symptomatic of something else.  Business leadership is rarely easy even under the best of circumstances.  There are many moving pieces inside and outside the organization; a lot can go wrong.  You will be surrounded by traps of your own making of if you’re not careful.  Ensuring heterogenous thinking before you act is always advisable.

Third, dissent almost always means different. It’s amazing how people working closely together can see the world differently. We all have blind spots. We also have different life experiences and worldviews. Everyone views the world with slightly different lands. It’s nice to be in a room with people who can see the error of your thinking before you can. Properly managed, discussions that encourage differences of opinion often lead to increases in creativity and better problem-solving.

Fourth, an organization where a reasonable amount of dissent is encouraged, by its very nature, creates a safer more open environment.  If your employees feel that you really care about what they have to say and will genuinely consider it, they will feel much more comfortable speaking up when it is sorely needed rather than looking the other way and allowing bad things to happen.   There will be less finger-pointing as well.  As the saying goes, “people don’t always have to get their way, but they have to feel heard.”

Finally, an environment where dissent is encouraged brings public what is taking place in private anyway.  Gossip is toxic to organizations. It is the conversations taking place after meetings where execution typically breaks down (or not). For some reason, it’s much easier for all of us to be critics rather than advocates of someone else’s ideas.  Often, we lack the courage to do this in public.  Maybe it’s because we need some time to adjust to the new information before accepting it.  I’d rather see my clients surface these conversations as soon as possible than avoid or ignore them.

Too much of anything is never a good thing and that also goes with dissent.  All dissenters aren’t created equal. You probably already know which employees have the right intentions and which do not.   Individuals who disagree for the right reasons are a priceless asset in any organization.  Why you still employ the latter, is the subject of another blog.  In addition, sometimes you have to get past personality conflicts between two individuals who for whatever reason can never see things the same way.  There is almost a knee jerk negative reaction from them when they consider the ideas or opinions of the other.  I encourage you to deal with this issue directly and encourage them to work it out and keep it professional.  And, don’t get to much joy from playing them off one another and thinking this is a leadership masterstroke – it’s not, especially when practiced by amateurs.

The best leaders encourage dissent through rigorous dialogue and debate.  They care less and who’s right and more about getting to the right answer. They shift some of the decision-making burden from themselves to the skills and talents of their team (and other employees) Their ego isn’t threatened by people who have better answers than they do or at least force them to come up with better answers themselves.  Encourage constructive dissent in your organization and good things will happen. Then once, you make a decision, expect everyone who contributed to the spirited dialogue to execute it to the best of their ability.