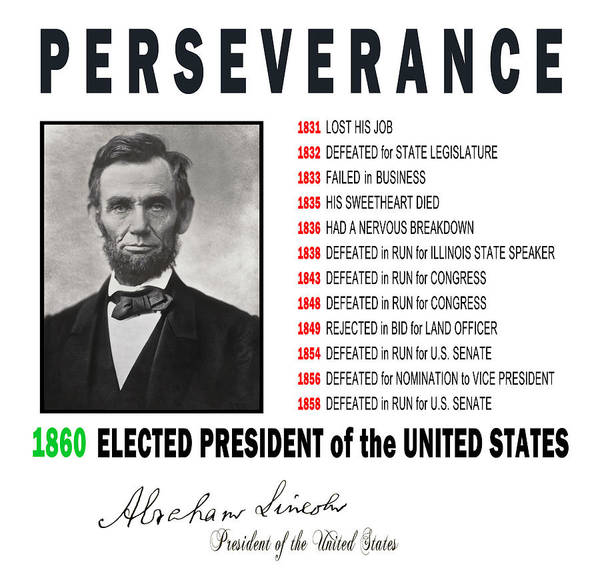 Sometimes you just have to persevere until you accomplish your objective.

I’ve had this plaque hanging in my office for many years now with the title, Perseverance, and it uses the life of Abraham Lincoln as a model.  It’s amazing how many failures and obstacles he had to overcome in his personal and professional life.  I get depressed for him just reading the examples they provide on the plaque itself and there were many more not even mentioned.  Most people would have given up or lowered their expectations.  Lincoln kept pushing forward and believing in himself and the higher purpose of his calling and talents.  He was willing to risk war and its devastating consequences (and setbacks) to do what he felt would be the right thing for this country.  We should all be eternally grateful for his ability to persevere.

Today we got the news that Osama Bin Laden has been killed and is no longer a personal threat to the world.  Justice has been served and hopefully our leaders will keep forging ahead and doing what is right to protect our country and its allies from senseless violence and terrorism.   I’m sure it has been and will continue to be a difficult and frustrating job for those responsible for our homeland security.  It’s been a long time since 9/11.

I have no doubt that President George W. Bush wanted to achieve this outcome and worked extremely hard toward it.  He could have given up many times but did not.  President Obama was handed this responsibility and had to exercise similar patience and resolve in many ways.  Like his predecessor he came under intense pressure and scrutiny from others for not being initially successful.   Fortunately for all of us, neither leader, nor their staff, or most importantly the intelligence professionals and brave soldiers on the ground gave up; they persevered and got the job done.

Being President of the United States of America must be a very heady job.  However, despite the trappings of position, power, and influence, it must also be a very lonely role as well.  As should be the case in a free country everyone has the right to criticize your every move with limited or sometimes no real understanding of the facts at hand.  There are countless media blowhards with minimal leadership experience who fancy themselves as experts on what you should or should not be doing. They also get paid handsomely to stir up controversies.  The physical and emotional pressures of the presidency are obviously draining; just look at the before and after pictures of every modern president.  We should all be thankful they choose to do the necessary work and risk many things including their own personal well-being to assume the mantle of responsibility. They persevere on difficult matters, so we don’t have to.

I hope that today we can all just be appreciative citizens. It would be nice if we could briefly put aside our differing individual philosophies and opinions to celebrate the efforts and perseverance of many of our fellow citizens, including some who risked their own lives to bring Bin Laden to justice.  Our country is not without its flaws nor are our leaders.  We do make mistakes and sometimes struggle with living up to our own democratic principles and values.  Dialogue around how we are doing in this regard should be an on-going and vigorous debate.   However, this mindset should also be balanced against the historical facts of how we can rally together, make significant sacrifices, persevere, and accomplish remarkable things as individuals and a country. “A house divided against itself cannot stand.” A nation that sticks together even when it is hard, listens to each other, trusts, and leans on one another, does its best to stick to its common principles and values, will persevere especially in times of trial and tribulation.

We all must believe and trust that we can “…weather any storm and meet any challenge,” otherwise our fragile democratic experiment may be in jeopardy.