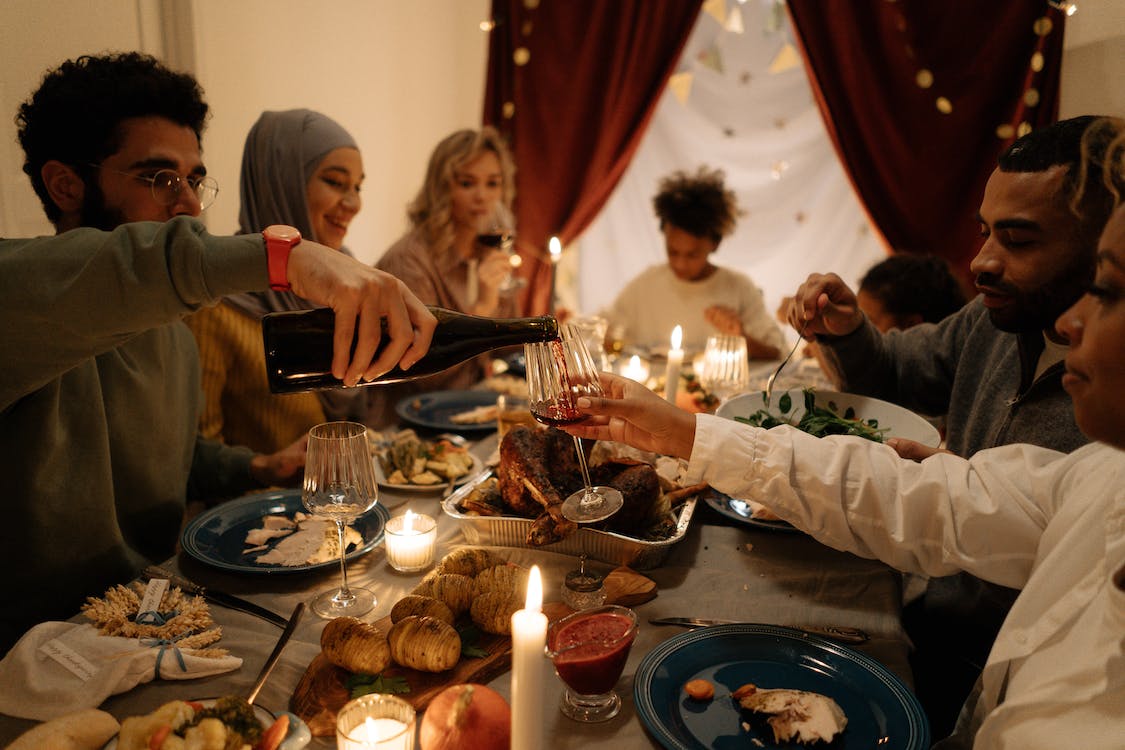 I am always drawn to the romantic view of the first Thanksgiving.  Not sure this is fully accurate, but the story informs, nonetheless.

A group of people new to a foreign land begin to build a community completely out of nothing.  They didn’t arrive well-versed in how to do this, but instead figured it out as they went along.  Their motivation was simple: freedom to live their lives as they wanted without fear of retribution.

Another group of Native-American Indians saw the settlers struggling to adjust to their new surroundings and ended up helping them learn to adapt and survive in their unfamiliar environment.

I am sure there were those on both sides who feared their respective differences, but somehow, they collectively managed to figure it out and respect one another.

Both groups came together at a feast and shared food and traditions from their respective cultures.  They didn’t just eat with one another but also spent several days enjoying each other’s company and getting to know one another better.

I am sure there are holes in the simple retelling of this story (and we all know how it ended up for the Native American Indians), however, it did seem for a brief moment in history people of vast differences figured out how to coexist, support and learn from one another.

This is America at its best.  People coming together and rallying around our shared objectives of individual freedom and collective responsibility.  Our diversity of perspective and capability is our strength.  Sadly, our basic human reaction is to fear differences.   However, we are strongest as a country and society when we don’t succumb to these fears and instead strive to understand and respect one another.  Throughout history, it has always been easier for leaders to divide rather than unite us.  All they need to do is prey on our instinctual weaknesses.  In contrast, the best leaders encourage us to unify around common goals and objectives that serve all of us better.  This is much harder work, especially as our country has grown in size and diversity and become increasingly segmented around differing points of view and socio-economic realities.

Life is not a win-lose proposition.  My gain doesn’t have to be your loss or vice versa.  We can both win just maybe not as much as we’d personally like to.  Living an ethical and moral life always involves some level of sacrifice. I’ve often wondered how different things would have turned out if we embraced the spirit of Thanksgiving and instead of conquering and removing the Native American Indians, we would have instead figured out a way to coexist with them peacefully.   This may sound naïve and Pollyannaish to some, but so be it.  There is always a gap between the “ideal” and the “real.”   That doesn’t mean you don’t strive to bridge the chasm.  Abraham Lincoln, during a very dark time in our nation’s history, implored us to tap into the “better angels of our nature,” It would be nice if we would heed his advice.  Not just for one day or a holiday season but as an ongoing commitment to one another.

I hope your family and you have a joyous and peaceful Thanksgiving.  As the year draws to a close, my wish is that 2019 ends better than planned and if not, that you gain the wisdom and resilience to make 2020 a stellar year.  I also hope that instead of yielding to the negative energy of what we all assume to be a difficult election year, we elevate the dialogue amongst ourselves striving to find common positive ground.  In a metaphorical sense, I envision us all sitting around a large Thanksgiving table being thankful for our many individual blessings and shared American destiny.